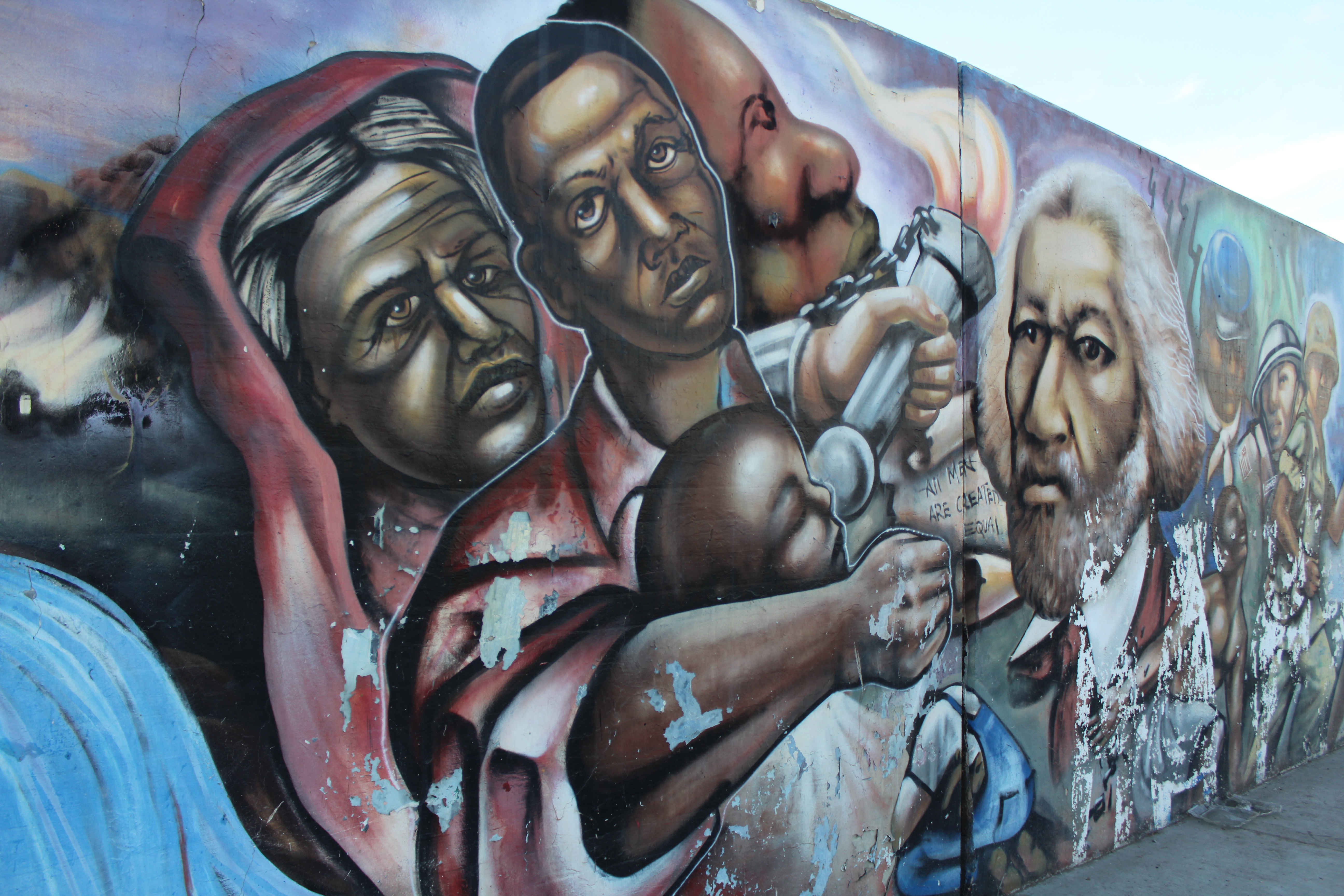 For many residents and locals, a wall that runs along Crenshaw Boulevard holds a special place in the neighborhood.

The Crenshaw Wall, a street-long concrete barrier located near Crenshaw Boulevard and 50th street, is famous for having housed many African-American inspired murals since the 1960s. It currently displays the mural “Our Mighty Contribution” as a tribute to African-American history and its future, and which is the creation of a graffiti artist collective called Rocking The Nation.

The wall, which is now considered a historic and cultural landmark of the Crenshaw neighborhood, is able to be restored thanks to the support the collective receives from organizations such as Project West, an organization dedicated to the preservation of hip-hop culture, among others.

However, this wasn't always the case.

Eric Walker, one of the twelve original artists who created the current mural, says the collective started off with little financial support.

Eric "King Cre8" Walker is one of the 12 original artists that created the graffiti collective Rocking The Nation. Eric explains his work with the collective and the meaning behind "Our Mighty Contribution.""

“A lot of the spray paint that we originally used came from our own spray paint”, Walker recalls. “It wasn’t like we had great funding, it was just out of our own pocket.”

Now the mural is strongly embraced by the Crenshaw community and is well-known throughout Los Angeles.

To former South Central resident Rodney Lister, the Crenshaw Wall holds a lot of meaning in the Crenshaw neighborhood.

Lister remembers the “Great Wall of Crenshaw” fondly. He first spotted it as a teenager after moving into an apartment complex near South Central Los Angeles with his parents. Lister would visit his family near Leimert Park most weekends and spend a few moments checking in on the wall.

Lister’s feelings hold true for most people who pass by the well-known wall.

Bryan Tanner, a frequent neighborhood visitor, also recalls the wall positively and believes the wall’s fame and attraction helps residents boast about their community and its place in Los Angeles culture.

“I mean artists have filmed music videos here. Ice Cube for example. And yeah, everyone in Los Angeles knows about the Crenshaw Wall,” Tanner says. “It makes you feel proud of the neighborhood when tourists stop by just to take a picture with the wall.”

To Tanner specifically, what really brings meaning to the wall is the mural’s representation of iconic African Americans and African-American culture.

“The wall is real special to everyone, I think. To me, it represents black culture,” he said. “I like seeing the people painted on the wall because they represent us well. Martin Luther King, Malcolm X, all the folks up there mean a lot and did great things, you know. They are being honored and this wall is honoring us.” 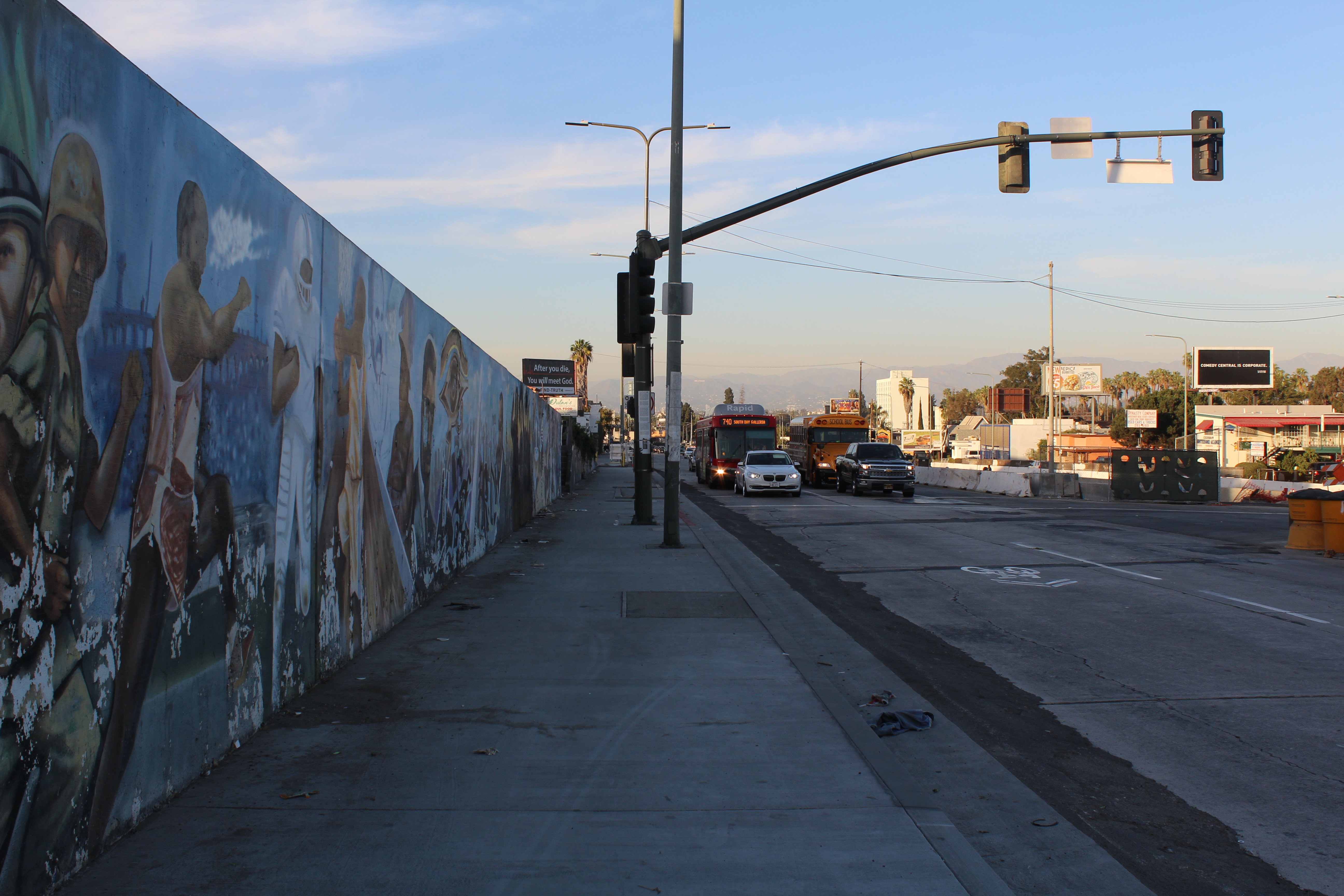 The acclaimed wall is located on Crenshaw Boulevard, a heavily traveled street.

Then there are residents who praise the wall not only for its fame and beauty but for serving a larger good for the neighborhood. Rev. S. “Scuffie” Shigg, who leads a congregation a few blocks away from the wall, has seen several murals adorn the wall and believes it creates opportunity, not only for the artists who have worked on the wall but for everyone who can draw inspiration from it.

“The wall has always provided artists a place to display their talents. Where else can you display your ability to transform a blank canvas wall for the whole world to see?,” he said adding that Crenshaw Boulevard is a heavily traveled street in Los Angeles.

Rev. Shigg also noted that while it is prestigious to point out one has work on such a famous wall, more importantly, the wall has the ability to inspire “somebody else to come back and hopefully recognize his ability too and give him or her a shot at doing bigger and better things.”

Rocking the Nation continues to work on restoring the acclaimed wall and Rev. Shiggs hopes that their efforts will continue to protect the wall for future generations to see themselves reflected on.

Rocking the Nation has many hopes for the wall and is currently working on expanding it to bring it up to date with African-American history along with creating an application that would allow people to learn and independently tour the wall.

Walker is proud the mural has become such an important part of the community and is excited to continue his work. He sees a positive future for the wall.

“I believe the history of this wall is going to get greater and greater," he says.